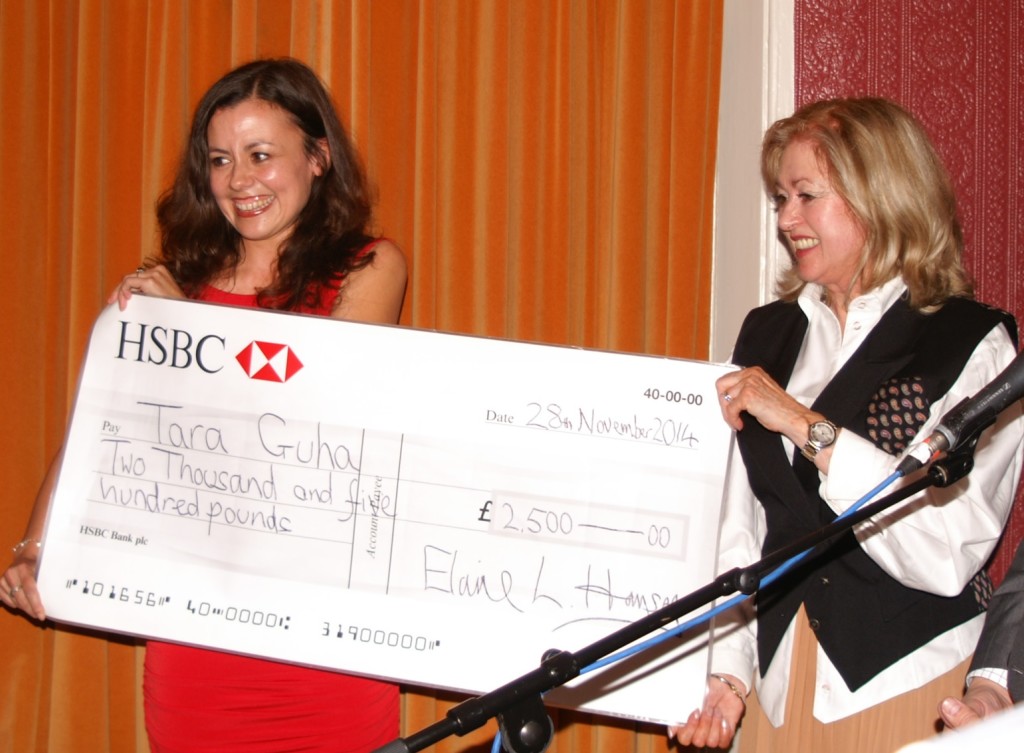 2014 NOVEMBER A special moment for this years winner Tara Guha

We are delighted to have received Tara Guhas thoughts on how it felt to be the seventh Luke Bitmead Bursary Winner 2014
Feet First
Break a leg people said, but it was more my little toe that worried me. Since fracturing it three months earlier in a reckless encounter with a pair of wedges, I'd kept my dodgy feet in flat shoes. But now my sister-in-law had surprised me with a stunning new dress for the Luke Bitmead Bursary award night and, at the risk of sounding like someone I'm very much not, I had a shoe conundrum. Flats with that dress were just wrong. So 6.30 pm on Friday 28th November (the day!) found me hunched by some railings outside the Betsey Trotwood (the venue!) wrestling in the dark with one particularly stiff buckle as cool London people brushed past me. Don't let go of me I hissed to Dave (the supportive partner!). Together we hobbled inside.
I knew I wasn't going to win, of course. Knew it to the extent that it wasn't something I needed to consider or visualise even briefly. I'd put everyone right on that score. I was so thrilled to be shortlisted, to have that unexpected validation pop into my inbox amid the nicely phrased rejections, that I was just going to enjoy the night. It wasn't hard to do. There was Louise, easily recognisable from her Twitter photo, and other shortlistees, many of whom had travelled down like me from the north. Everyone was excited, eager to find out about each other. The atmosphere was warm and easy, like a party amongst friends. I met Lauren, Lucy and Lottie (the publishers!). I had a long conversation with Luke's mother Elaine, and felt we really connected. I knew I hadn't won, and the conversations with those in the know confirmed that, but I was touched at how carefully people seemed to have read my book and personal statement. My mind fizzed and my feet tingled.
It didn't go entirely smoothly. In a chat with lovely ex-winner and judge Ruth Dugdall I felt my brain cave in on itself when she asked me about my literary influences. I heard myself, in horrified slow motion, answer that I'd done a literature degree and loved "Emily Bronte and … er… people like that." People like that? Bet she was glad she hadn't picked me! By now the tingling in my feet had become a persistent throb, so as the presentations started I took a seat away from the stage and the cameras. Ruth's speech was properly inspiring and I admired, in an abstract way, how she had seized on the opportunity of being the Bursary winner. And then there was a Strictly Come Dancing moment as all the shortlistees were called up "in no particular order", which my kids would have appreciated. Better get ready...
I clapped as each shortlistee was named and came to the stage. More names, more clapping, and still not my own name, which was odd. Names, clapping, names … good grief, we'd reached the top three and Dave's eyes were nearly popping out of his head. I wasn't third. I pictured telling my parents I'd come second as I prepared to hear my name. But it wasn't my name. Dave grabbed me but I was frowning - there had been a mistake, they'd forgotten to announce me earlier, the real winner was still out there. I was shaking. People were turning to look at me. Then I heard it - my name, my book. Never in my life have I been more completely and utterly poleaxed.
I hadn't thought for a second what I might say in this situation. Somehow I managed to thank Legend Press and Luke Bitmead's family, but not a word for anyone else. Oscars speech it was not. I had to hold a giant comedy cheque (could I smuggle it home to show my kids?) and grin for the cameras. The pictures of me that evening show the same wide-eyed, wondering, slightly trippy smile as on the photos taken just after my children were born. At least I was expecting them!
Afterwards Lauren casually delivered the second most shocking revelation of the night - the publication date of my book. My book had a publication date. My book that I'd worked on for eight years in the corner of a bedroom around ill kids and long winters. People had been talking about it, scheduling it, writing a press release about it. I may have opened and closed my mouth several times like a fish at this point.
For the rest of the night I drifted around sipping champagne and hoping my brain would play catch-up. People were so warm in their congratulations: best-selling author and judge Sam Mills, my fellow shortlistees, and Elaine, who told me they were all being careful not to give the game away earlier (no problem on that score, folks!). Tom, the MD of Legend Press, referred to me as an award-winning author, and I laughed. Until I realised he was serious. Finally numbers dwindled and just a handful of us were left at the bar. I looked around, feeling fuzzy, happy and strangely at home. It was time. Foraging in my bag, I got out my flats.
A celebratory moment!
The Winners!

Watch the 7th Bursary Award speech on You Tube

We are greatly looking forward to awarding Luke's Writer's Bursary on 28th November 2014 and will be posting my speech the next day for those of you who are unable to be with us.
THE 2012 LUKE BITMEAD BURSARY WINNER JO GRAHAM GETS HER SECOND BOOK PUBLISHED ! SHE SENT US THIS QUOTE:
"On the 31st October 2014, my second book - To the Edge of Shadows - was published. I walked into my local Waterstones and there was a lovely stack of them waiting for someone to pick one up. On the shelf behind was my first book - Lacey's House - winner of the 2012 Luke Bitmead Bursary. It was a dream come true for me and none of it would have been possible if it weren't for the bursary set up in Luke's memory by his wonderful mother Elaine. To say that it has changed my life is an understatement. At the time of winning I was working in my day job with teenagers who displayed challenging behaviour. I was writing in the evenings after my children went to bed... it was exhausting and there never seemed enough hours in the day. In July of this year I finally took the plunge and gave up my day job to write full time. It feels incredible to be able to say that I am now officially a full time writer and two years ago I would never have believed it possible."
It is thrilling and encouraging to receive this news particularly as we are about to hold the award evening for the 7th Bursary on 28th of this month.
To know past Bursary winners have received a really solid step forward in their writing careers demonstrates the validity of awarding Luke's Bursary.